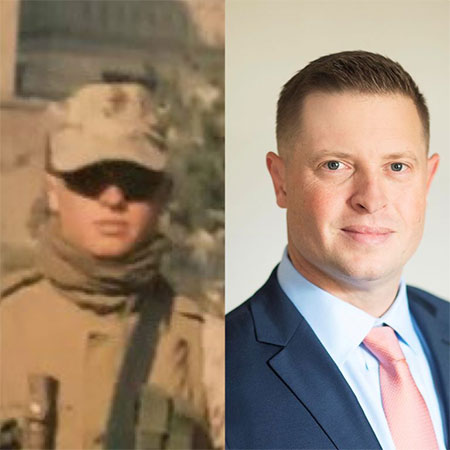 Taylor Flowers, director of EMS relations for Chippenham and Johnston-Willis Hospitals, was in college when the Sept. 11 terrorist attacks impacted our nation. As someone who had a lifelong dream of joining the military, Flowers felt compelled him to pause his education and enlist in the U.S. Marine Corps in 2003. He did a tour in Afghanistan based out of the Bagram Airfield providing protective military detail for the president of Afghanistan, Hamid Karzai, in his presidential compound.

“It was an awesome experience being there for the first inauguration,” Flowers said. “We were the only armed military unit allowed and trusted in the compound to provide that level of protection for President Karzai.”

While completing two more tours in Fallujah, Iraq, he witnessed tragedy that he said changed the trajectory of his career.

“I was on the roof with one of my best friends, Josh Snyder, and he had been up there for four or five hours,” he said. “Some kids were yelling up to us asking for food, so Josh left the secured, covered position behind the ballistic glass and went down to give the kids MRE (meals, ready to eat) – and he was shot in the head by an enemy sniper.”

Flowers’ company went on to lose five Marines, which he said pulled the rest of the group closer and had them question how they could do more. He decided to get additional training to become a Marine scout sniper in Fallujah during his final deployment.

“We wanted to push ourselves more because, being an infantry unit, we were very reactive and not in control of anything,” he said. “Whether it’s a sniper attack, kids throwing grenades, stepping on IEDs, you’re completely at the mercy of luck.”

He had gotten engaged to his college sweetheart, Sara, after his first deployment to Iraq and did not reenlist in 2007. But the call to serve continued to drive him and after a year, Taylor joined the reserves and went on training missions to South Africa.

Looking back on his military career, he says he misses active duty, but describes his house as a combat zone with three young sons – one of whom is named after his friend Josh.

Flowers finished his bachelor’s degree, earned a master’s degree in emergency management, and spent the next 11 years as a firefighter when the familiar feeling of wanting a new challenge returned. That’s when he joined HCA Virginia in 2019 as the director of EMS relations for Chippenham and Johnston-Willis Hospitals.

“I wanted to expand my perspective, really push outside of my comfort zone, and learn something new,” he said. “It really says a lot about the people you choose to surround yourself with. I’m a very driven person who is attracted to high performers.” It’s a close parallel he said can draw between his military and HCA Healthcare career.

HCA Virginia leadership support, coupled with the potential for his position to have a broad positive impact on others and the constant drive to improve, creates a workplace culture Taylor wants to be part of.

“The biggest adjustment I had [shifting to my hospital role] was figuring out what to wear to work,” he said. “I never had to do that for almost 20 years.”