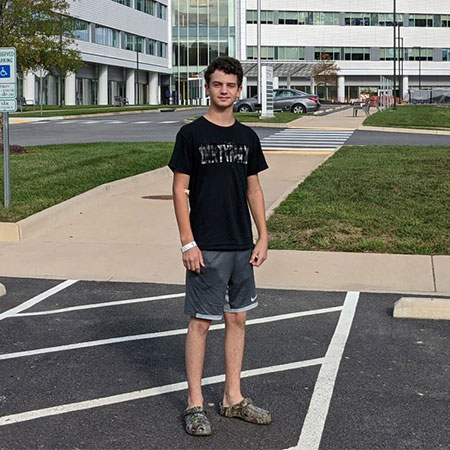 Seven months ago, Stephen Yago’s parents were faced with the possibility that their teenage son would live indefinitely in an assisted living facility after a near fatal wreck. Stephen, 17, was ejected 50 yards from his truck – and landed on his head – after a mechanical malfunction caused the vehicle to flip several times. After being treated at HCA Virginia’s Chippenham Hospital, he is now finishing his senior year of high school and will graduate on June 3.

The wreck happened on a country road in Powhatan and Stephen was taken via ambulance to Chippenham Hospital. A woman who happened upon the accident was a hospice nurse and her goal was to keep Stephen alive long enough so that his parents could see him and say goodbye, Cathy said.

He was unconscious and in critical condition when he got to the hospital and the team intubated him and put him on a ventilator in an induced coma for a week.

“I cannot say enough positive things about the nurses and the doctors at Chippenham,” Cathy said. “They were so kind and so patient and they just explained everything to me step-by-step and didn’t push me along.”

Even though he suffered a traumatic brain injury (including bruising and bleeding of his brain), skull fracture, and several other breaks in his body, he started to recover quickly. Now his biggest problem is retro amnesia, which means he doesn’t remember anything from a couple of hours prior to the accident up until two weeks after.

“He is such a blessing, but I don’t know if he realizes it because he didn’t see what we saw,” Cathy said. “He doesn’t understand the miracle that he is.”

Chippenham Hospital’s Level I Trauma Center is one of two hospitals in the region with this status. It is the highest level of trauma care that a patient can receive.