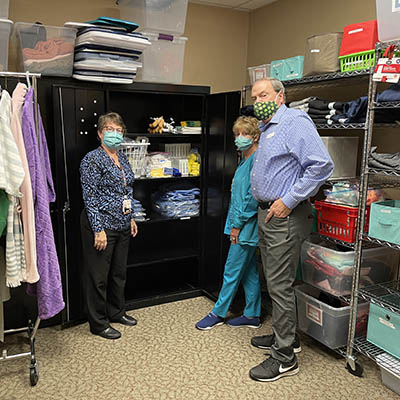 Several HCA facilities have employee-supported clothes closets for patients in need and their families. The largest is the Jane O’Toole Clothes Closet at Chippenham Hospital, named after a former employee who was the operations manager at Tucker Pavilion for more than 20 years.

What started as a volunteer initiative supported by employees has grown into something much larger, thanks in part to Jane who was instrumental in launching and growing the program before her unexpected death in 2017.

“The closet has really blossomed throughout the past year in particular,” said Rebecca Perkins, the director of revenue compliance at Chippenham, who was close with Jane. She attributes the increase in use to COVID and families not being able to bring clothes to patients, and because Chippenham is now a Level 1 trauma center and sometimes people travel in from a distance.

The goal of the clothes closet is to allow patients to leave the facility with dignity, she said.

“Nothing is more important than the dignity of our patients when they leave here,” she said. “There have been many who have said, ‘Is this for me? I can’t believe it.’”

There is now a dedicated space in Chippenham for donated items and the support is growing. Instead of a holiday party in December 2020, one of the nursing units chose to stock the clothes closet as a present from a community perspective. Colleagues brought in brand new socks, underwear, gloves, sweatpants, sweatshirts, and winter coats.

As for the clothes closet’s biggest cheerleader, Mike O’Toole (Jane’s husband), he said that it also has another purpose, which is keeping Jane’s memory alive.

“It’s something you talk about and work towards … collecting clothes in her memory. It gives you a chance to tell new employees about who Jane was and what she meant to the hospital,” he said.