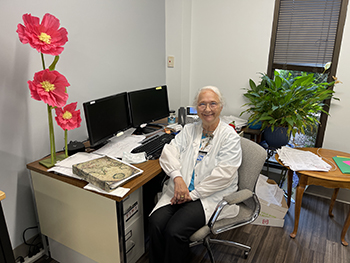 Becky Allgood watched the first shovel break ground on the current Johnston-Willis Hospital campus. She had already been a member of the hospital family since 1966 at its previous location, and she has been coming to work every single day since – oftentimes commuting three hours roundtrip.

Now that she’s retiring after 56 years of nursing, she reflects on her legacy as a certified rehab registered nurse and her feelings about leaving the hospital.

“Things were very different back then,” Allgood said. “Lots of things were coming. For example, CPR had just started being accepted in the early 1960s. This was before ICUs [intensive care units] were created.”

She said the biggest thing she’s witnessed throughout her career is the introduction to new equipment and that she remembers the first monitors used during surgical procedures. Allgood describes herself as a hands-on nurse who welcomed all of the developments that helped her nursing colleagues. She birthed the rehab department at the hospital in the mid-1980s, which has received national recognition.

“We started from the ground up and opened the unit with two patients,” she said. “We mostly looked at stroke patients, spinal cord injuries, and ortho patients. I remember the first total hip [replacement] we ever did. They had to lie flat and were practically covered with pillows. They were very restricted in movement before rehab.”

For the past few years, Allgood has commuted to Richmond from her family’s farm in Boydton, Virginia. She has spent the majority of her life at Johnston-Willis, and now that she’s retiring, she said she’ll miss her colleagues and feels like a child leaving home for the first time.

“It’s always the people you work with who make a big difference, including the patients.”

What’s the first thing she said she’s going to do when she retires? Throw away her alarm clock.